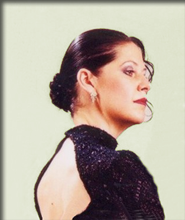 Christy Coté has been teaching, performing and choreographing Argentine Tango since 1996 and is one of the most respected teachers of Argentine Tango in the United States today. Her teaching method has been published in the Argentine Tango manuals by Dance Vision which are complimented by a series of 21 instructional videos with partner, George Garcia.Christy’s popular Tango Boot Camps have attracted thousands of students since 2007. She is also one of the featured teachers and performers for CITA, the annual International Tango Congress in Buenos Aires. In 2012 she became the first ever American judge for the Official USA Tango Championships, an annual event sanctioned by the Argentine Government. Christy has been featured on San Francisco’s KTVU Segment 2 Report, KPIX/Channel 5 Evening Magazine, nationally in Dance Spirit Magazine as well as numerous San Francisco/ Bay Area publications.